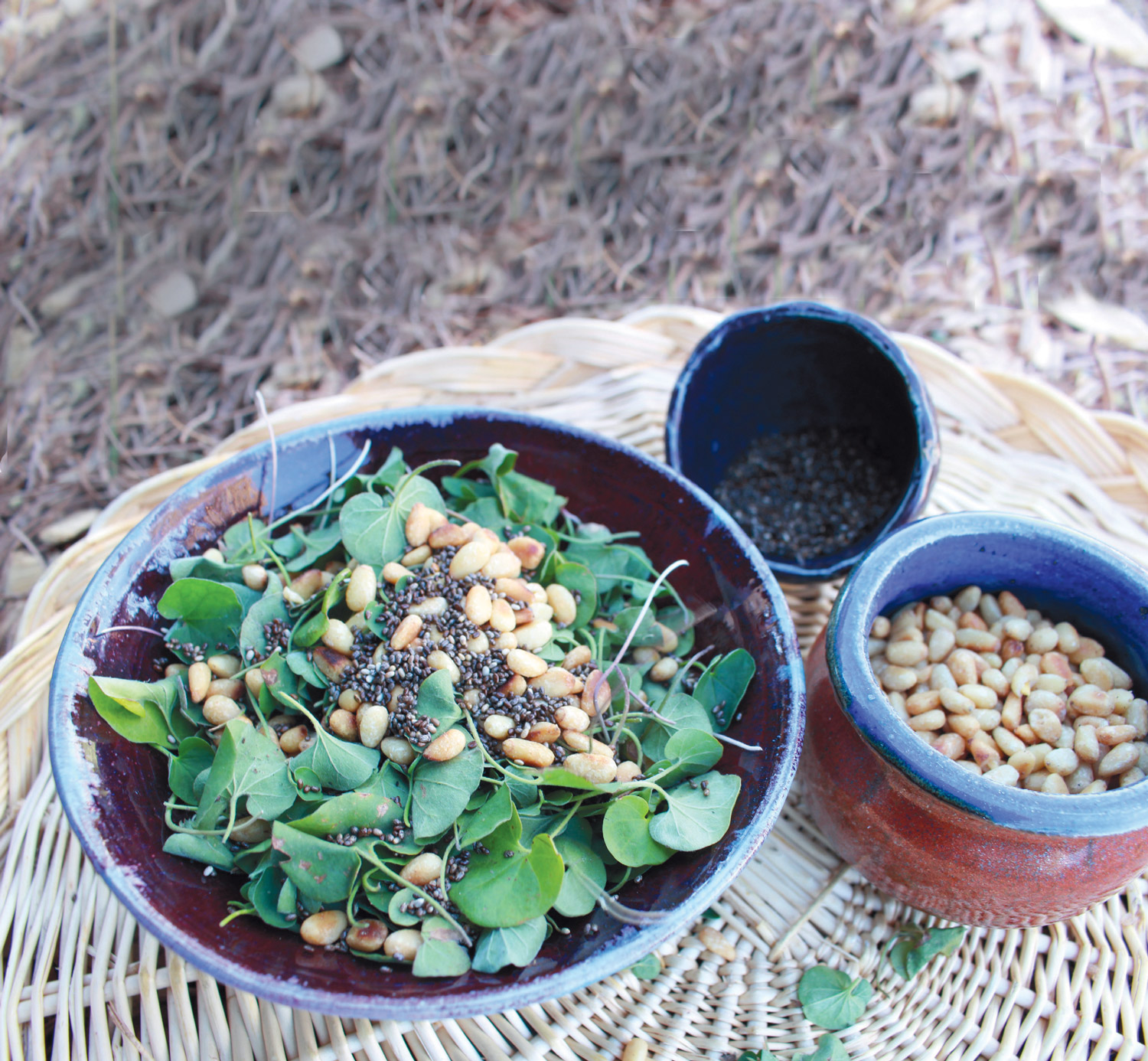 Miner’s lettuce is also known as spring beauty, winter purslane, or Claytonia perfoliata: It got its name because Gold Rush miners collected and ate it to stave off scurvy. To add modern Ojai flavors, serve with Citrus-Thyme Vinaigrette (page16).

Editor’s note: We respectfully invited Chumash Elder Julie Tumamait Stenslie to share a look at indigenous culture in the Ojai Valley and how it relates to food. By recognizing the history of our area’s first people, we can deepen our connection with the earth and our foodways today.

Imagine a time when we were all hunters and gatherers—Indigenous Peoples living in their indigenous lands. We had to pay attention to our surroundings and know our environment; our lives depended on this knowledge.

Beyond having the knowledge, there was interaction. As we recognized the Plants and Animals in our land, we hoped that they would recognize us too. We gave them gifts, sang to them their very own song; we gently harvested them, prepared them and consumed them. At the right time of the year we honored them in Ceremony. For the Chumash, that fall Ceremony is called the Hutash Festival. Hutash means Mother Earth.

The Ojai Valley has been home to our Family for over 10,000 years. Today, we use a variation of those village names: Ojai, from the Chumash awhay’, meaning moon; Matilija, or mat’ilha, which translates to correspondence; Sespe, derived from `seq`pe, Chumash for kneecap; Sisar, from sis`a, which means the eyelash; and TopaTopa, from Sitoptopo, translated much cane (a type of reed plant).

Since the time of hunter and gatherer, skills, techniques and lifestyles have declined and turned to a much faster-paced world. We don’t often allow ourselves the luxury of basking in nature. Knowledge has become mystery as we let others harvest our food. We have forgotten those ways, such as eating and harvesting by the seasons. But we can eat and live like the first Indigenous Peoples, The Chumash. Much of what grew then still grows here today.

We can take advantage of the harvest. Watching the oak trees and acorns from last year told us that the rain is coming. The size and abundance of the seeds were exceptional. This was a season when you could harvest enough acorns to keep you well into the following year if stored properly.

Ceremonies to call and pray for rain also still happen in this Valley. I invite People in the Community to join in this calling. But I say to them, “Don’t pray so hard for rain, it will come down that way.” Instead I have prayed for snow for the past couple of years. The snow is a better, slower way of getting water back to the land by melting slowly into the earth, filling the aquifers without causing landslides.

As spring approaches there is plenty of food to look forward to. 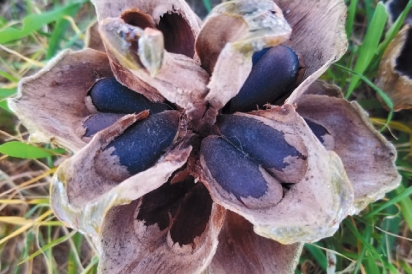 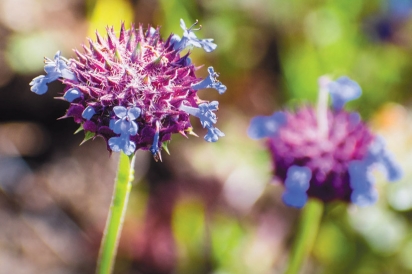 Photo 1: Pinyon pines in the Cuyama Valley drop cones with white seeds that are packed with protein.
Photo 2: Chia seeds are packed with nutrients and grow happily in the hills around Ojai and Ventura County.

Collect miner’s lettuce (Claytonia perfoliata) in the spring. Pinch off the leaf by hand; you can leave a bit of the stem. Don’t pick if it’s blooming. Rinse before eating.

Add pine nuts: The pinyon pine is in the Highlands; for us, that is the Cuyama Valley. When the pine cones fall they are ready to harvest. Some pine cones are open, others are not. Fire was often the way to open the cones to extract the nuts. Crack open the shell; the nut meat is white in color. These seeds can be eaten raw or toasted.

In the old days, the nuts were parched on a flat woven basket tray. Small hot coals from the fire were added onto the tray, which was then swirled around so as not to burn holes in the tray, only to roast the nuts. Pine nuts can also be ground up and made into a gruel. Soup and salad.

Next, add chia seeds (Salvia columbariae). Women collected these delicious and highly nutritious tiny seeds by using a seed beater, which looks like a tennis racket, and a basket. They beat the plant (gently), which caused the seeds to come out of the flower head. Many seeds didn’t make it into the basket; that was alright, as it fed the earth so more could grow.

You can toast these seeds as well. A cast-iron frying pan works well for this process. Sprinkle them on salad. When ground up into meal, they can be placed on your meats or fish for added protein.

MEAT FROM THE WILD

Salad can be followed by the main course of Deer, Rabbit, Quail or Rainbow Trout. These were cooked on an open fire on a spit or staked and set near the fire. Deer meat can be dried in the sun and turned into jerky.

TEA FROM THE ROSES

To drink, try a nice tea made from the wild rose (Rosa californica). Collect the rose hips after the flower petals have fallen off. Petals were dried and used for powder for the body and an eyewash, so don’t throw them away. Peel the hip open and extract the seeds, then plant them. You can make sun tea or boil water and let steep for 10 minutes.

To obtain these foods now, I encourage you to plant them in your yards. If you do not own a yard, create a native garden in your community. This makes collecting easier and it doesn’t take away resources from the native species in nature.

But please remember to honor the thousands of years that these Rooted, Finned and Four-Legged People have been sustaining this world for Generations.

To all our Relations. 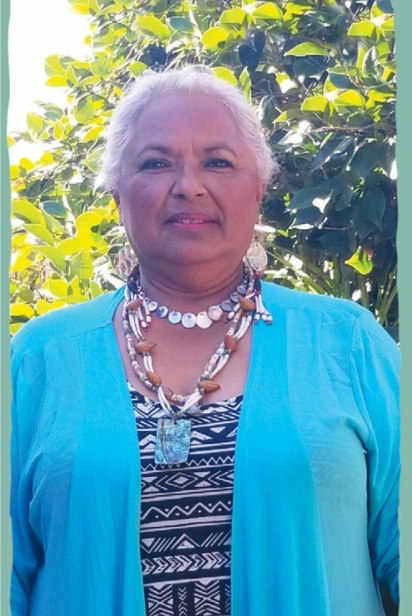 Born to Vincent and Lucy Tumamait and raised in the Ojai Valley, Julie Tumamait Stenslie was appointed a Chumash Elder after the death of her father in 1992. She lives in Meiners Oaks with husband, Bruce Stenslie, and their children Paula, Robin and Aren. She is a commissioner on the Native American Heritage Commission and a board member of the Santa Clara River Conservancy. She is also the Tribal Chair of the Barbareño/Ventureño Band of Mission Indians (Chumash).

“I am the Daughter of this Sacred Ground.”