Zukes by the Zillions 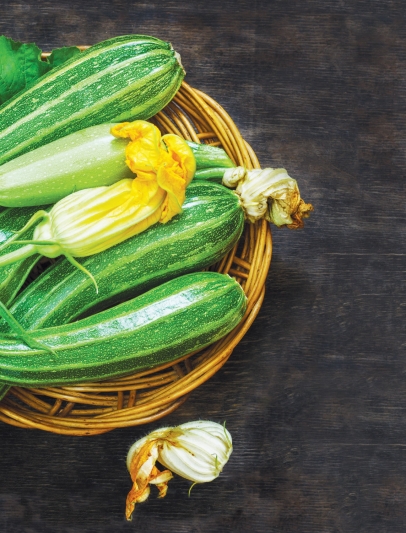 Well, it has happened again. After battling powdery mildew, garden pests, blossom end rot and issues with sun, water and soil, my zucchini plants have taken off and now I am overrun.

I always start with the best intentions, even with plans about how this year we will eat every single summer squash. But just one week of ignoring the garden results in at least three very large, much-too-mature, how-are-we-going-to-eat-these, slightly bitter fruits and a dozen or more just-the-right-size, tender courgettes.

Zucchini descended from domesticated squash that originated in Central and South America but in the 1800s was cultivated into its current form in Milan, Italy, which is where it got its curious name. The fruits, blooms and leaves are all edible, though the younger plants tend to have fresher flavors; bitterness comes with age, in this case. While a mature fruit can grow over three feet long, zucchini should be (and usually is) harvested while still immature, or at about six to 10 inches.

Rich in antioxidants (mostly in the skin), manganese, potassium, magnesium and vitamins A, C and K, zucchini has been shown to support the immune system and vision health, making it a great choice to add to recipes. While it can be eaten raw, a quick grill, steam, broil or roast increases the bioavailability of vitamin A in the fruit and keeps it from getting mushy.

Thankfully, especially as the garden kicks into high gear, zucchini can be added to nearly anything. Due to its very mild flavor, it is an incredibly versatile food, finding its way into both savory and sweet recipes. It is a great low-carb alternative for pasta and can be spiralized or sliced to substitute for spaghetti, linguini or lasagna noodles in most recipes. If you like to get sneaky, it can be blended into sauces and soups for a boost of nutrients without any impact on flavor or texture.

The following recipes—by Joel Huff, chef and co-owner of Frontside Café in Ventura—offer a way to up your zucchini game with adventurous new takes on some old classics. 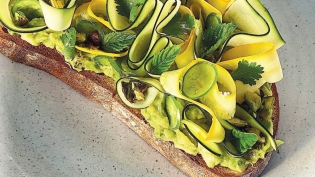 Impress friends and family alike with this upgraded and very seasonal version of the popular avocado toast. Let... 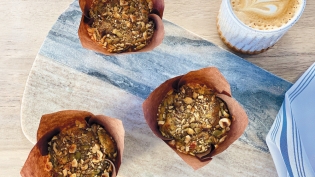 A new twist on the traditional sweet zucchini muffin, this nutty savory snack with an Egyptian-influenced Dukkah... 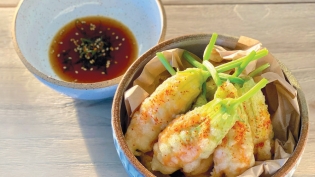 This Japanese-influenced spring/summer dish is one yummy way to utilize the abundance of zucchini blossoms... 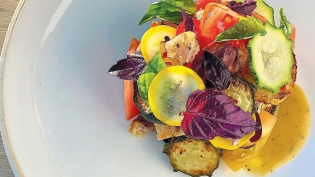 Bright and cheery, this summery salad is a great way to incorporate the abundance of the July garden.

Impress friends and family alike with this upgraded and very seasonal version of the popular avocado toast. Let your inner artist flow by making this as decorative and beautiful as it tastes.

A new twist on the traditional sweet zucchini muffin, this nutty savory snack with an Egyptian-influenced Dukkah seasoning, has just the right combo of flavor and nutrition. Serve as a breakfast or a ...

This Japanese-influenced spring/summer dish is one yummy way to utilize the abundance of zucchini blossoms without being overwhelmed by the squash itself. The tart citrus-y ponzu sauce utilizes the no...

Bright and cheery, this summery salad is a great way to incorporate the abundance of the July garden.